We hold these Truths to be self-evident, that all People are created equal . . . 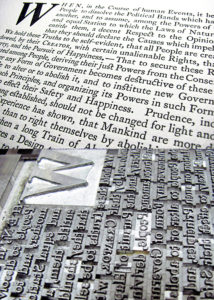 Stand up for your rights!
I printed the rewritten, inclusive edition of the Goddard Declaration of Independence on July 4, 2010, changing “Men” to “People” in two places in the document:  “We hold these Truths to be self-evident, that all People are created equal, that they are endowed, by their Creator, with certain unalienable Rights, that among these are Life, Liberty, and the Pursuit of Happiness.—That to secure these Rights, Governments are instituted among People, deriving their just Powers from the Consent of the Governed, that whenever any Form of Government becomes destructive of these Ends, it is the Right of the People to alter or to abolish it, and to institute new Government, laying its Foundation on such Principles, and organizing its Powers in such Form, as to them shall seem most likely to effect their Safety and Happiness.”

Whether the initial intention of all Men was to be understood as men only (white men and African men), white men only (men who had the privilege of owning land and the right to vote), or all of mankind, is not definitively known. However, it was clear to me that an unambiguous and all-inclusive edition proclaiming “all People are created equal,” was necessary, and that after more than two centuries, it was well past time to set the record straight.

When I began this project in July of 2008, my intention was to create the Goddard Declaration with it’s inclusive language only. It was long overdue. I decided to honor Mary Katharine Goddard by printing the historic re-creation initially (printed on an off-white paper in 2009) and then went to press with the second “contemporary” edition (printed on a bright white cotton rag paper on July 4, 2010).

Now more than ever, it is vital to stand in solidarity with ALL PEOPLE. Happy July 4th, as we embrace the movement to a new, more equitable Union!

Posted in All Posts, Blog, Declaration of Independence