Artist Mindy Belloff is the first contemporary printer to accurately recreate the world-changing Declaration of Independence in 2009, as originally printed by a woman, Mary Katharine Goddard in January 1777.

During our country’s infancy, Congress ordered two official printings of the Declaration of Independence. On July 4th, 1776, the Declaration of Independence was authorized to be printed by John Dunlap of Philadelphia. The design of the Dunlap printing resembles the written document, with each line running across the page in a single column length. On January 18, 1777, Congress convened in Baltimore and ordered the second printing by Mary Katharine Goddard. This edition is outstanding as the only Declaration titled The Unanimous Declaration of the Thirteen United States of America, having been printed after New York had finally cast its vote to form the thirteenth state, and as the very first printing to publicly reveal the names of all the members of the Second Continental Congress. Also unique about this Declaration is the Printress, a highly respected press woman, whose fresh design in two-columns set it apart. Most people are not aware of this important historic printing by Mary Katharine Goddard. While there have been numerous facsimiles of the Dunlap document over the past two centuries, until Mindy Belloff’s announcement of her project in January 2009, there had been no reprinting of the 1777 Goddard Broadside. 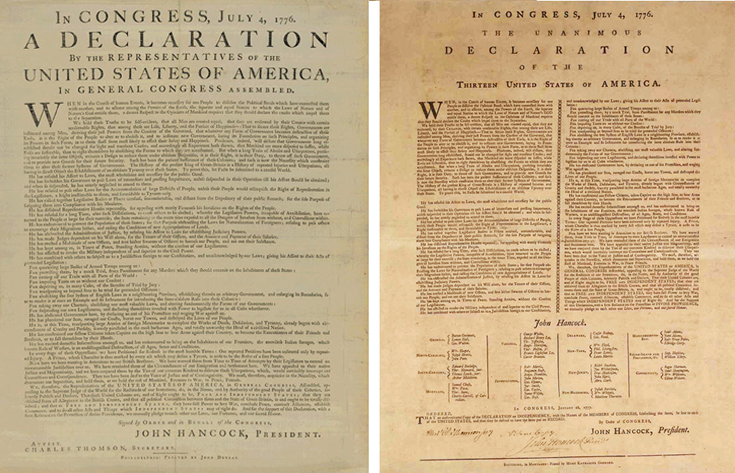 Mary Katharine Goddard was born in 1738. Her family was in the printing business. Along with her brother William, Mary K. printed newspapers in Providence, Philadelphia, and Baltimore.  In addition to being a journalist and editor, producing a weekly newspaper, she was appointed the first woman Postmistress of Baltimore, a position she held for 14 years. By printing the Declaration and boldly adding her own name to the bottom of the document along with those of the Founding Fathers, Goddard put herself at great risk for treason and possible death. By her actions and life choices, Mary Katharine Goddard was clearly a courageous Daughter of Liberty and proponent of freedom of the press and the right to uncensored expression.

Only nine known copies of the Goddard Broadside exist today.  To honor Mary Katharine, Mindy Belloff of Intima Press spent close to a year researching and accurately reproducing Goddard’s 18th-century design and printing, in 2009.  She hand set over 7,000 characters in Caslon typeface (as the original), and letterpress printed them one at a time on paper hand made specifically for the historic re-creation. The museum quality edition is limited to 100 (historic) and 118 (contemporary) copies. Each Declaration of Independence is 21 x 16 inches and is protected in an archival paper portfolio. A letterpress printed sheet of essays in blue and red ink on white paper, includes text by the artist with an introduction by David Armitage, Professor of History, Harvard University and author of The Declaration of Independence: A Global History; and an essay by Martha J. King, Historian of early America. 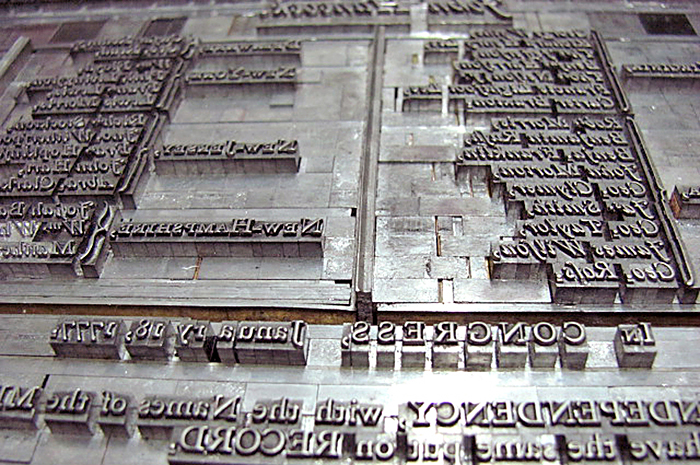 “Setting the Declaration in type was enlightening in many ways, as my thoughts throughout the process were of Mary Katharine in her print shop during the cold month of January, not having 21st-century amenities.  I could not help but wonder how Mary Katharine must have felt being entrusted to print this stunning proclamation while setting each letter of the text ‘all Men are created equal.’  Therefore, on July 4th, 2010, I went to press on a second unambiguous edition proclaiming ‘all People are created equal’,” explained  Mindy Belloff.  “Mary Katharine was an incredibly brave woman for her time. By her actions, she was clearly a pioneer for women’s rights and freedom of the press.” 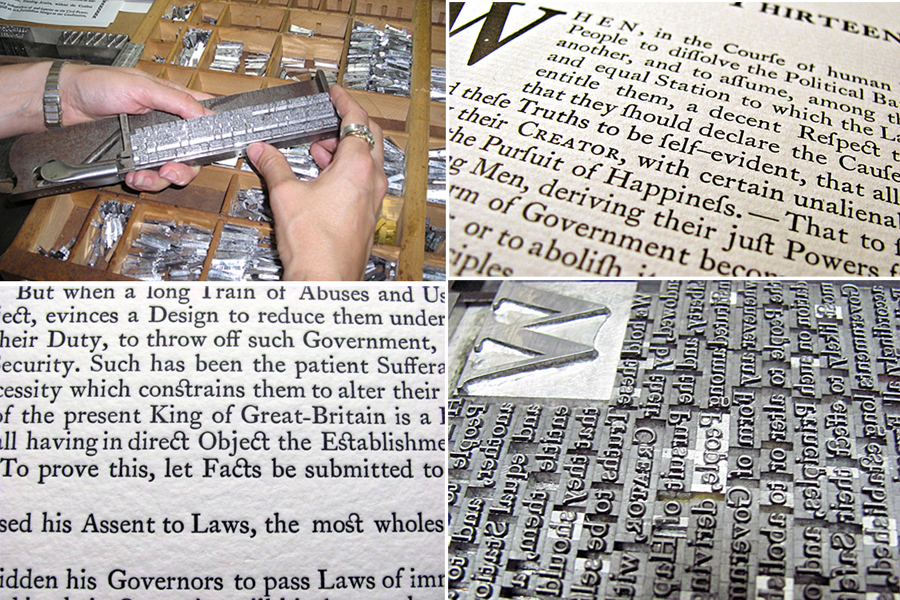 When we think of the Declaration of Independence today, it is the essence of the second paragraph stating an individual’s undeniable right to live freely, that most Americans can recite from memory: We hold these truths to be self-evident, that all Men are created equal, that they are endowed by their Creator with certain unalienable Rights, that among these are Life, Liberty and the Pursuit of Happiness. “While I believe most people intuitively understand all Men to mean that all are created equal – all men and women, all mankind, all people, there were clearly contradictory definitions of freedom and human rights in the late 18th-century and subsequently. I felt it was time to clarify the language.” 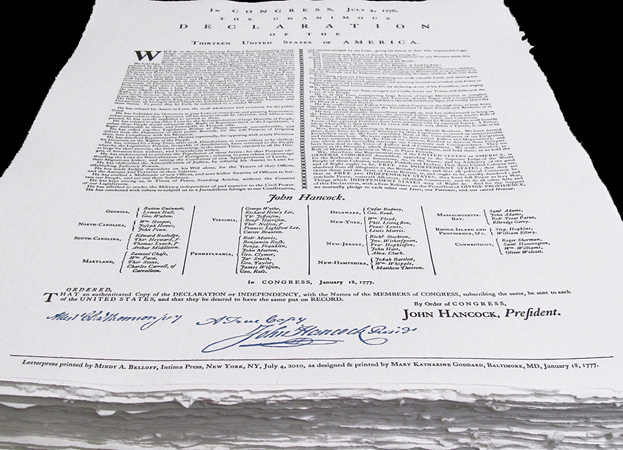 This contemporary edition of 118 is printed on a bright white cotton rag paper. The “long-s” characters were replaced by regular “s” characters and John Hancock’s signature was printed in a light blue ink instead of a sepia color.  However, what distinguishes this edition is the word “People” in two places, replacing the original “Men.”  This inclusive edition was partially funded by a grant from the Puffin Foundation, committed to supporting “creative and innovative initiatives that advance progressive social change.” 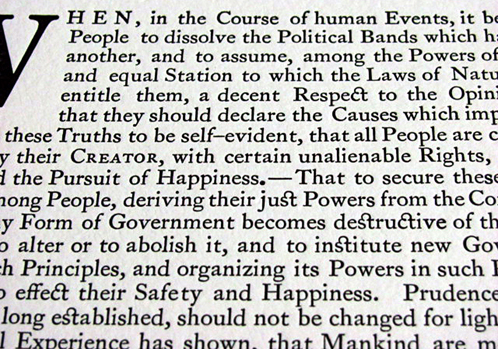 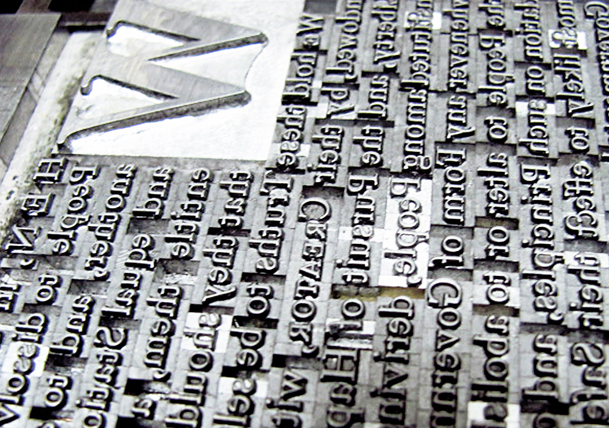 A RE-CREATION OF THE  DECLARATION OF INDEPENDENCE – two versions:

Contemporary Rewriting (2nd version)
Printed on July 4, 2010, by Mindy Belloff, New York, NY
Based upon the design and printing by  Mary Katharine Goddard, Maryland, January 18, 1777
Dimensions: 21 x 16; 2-color black and blue; Essays page 21 x 16 letterpress printed in blue and red; inside an archival paper folio; Broadside is hand set in Caslon & letterpress printed  on hand made 100% cotton bright white paper  (custom made by St. Armand, CN); Edition Limited  to 118.
Funding of the paper for this edition has been made possible  by a grant from the Puffin Foundation, whose mission is  to support creative and innovative initiatives  that will advance progressive social change.  Copies of the contemporary edition are available at $1,777 (+ shipping).

Both the contemporary and historic edition together: $3,200 (+ shipping). Prices of the broadsides increase over time.

Additional information on Mary K. and details on the making of the Declaration re-creation was published in the Guild of Book Workers Journal (2010-2011 edition, pages 84-96) titled, “Printed by a Woman: The Declaration of Independence in the Eighteenth and Twenty-first Centuries,” by Mindy Belloff (edited by Cara Schlesinger).  An expanded self-published essay will be available soon.

View a 4 minute video on the Goddard Broadside here: What people are saying:

“Your printing is a beautiful and faithful rendition.” – Dennis S.

“It is an understatement to say that your printing of the Declaration is beautiful and its overall presentation with the other document is stunning. I feel so lucky to have seen that segment of the CBS morning show that highlighted Mary Katharine Goddard and introduced me to your wonderful project and the art you created.” – David H.